Over 60% Of Ethereum Blocks Are OFAC Complaint, A Reason To Worry?

by Press Release
in Ethereum
0


When Ethereum finally moved from a Proof of Work (PoW) to a Proof of Stake (PoS) mechanism, it had been done to much fanfare in the community. Most celebrated the new promise of better efficiency and significantly less energy consumption. However, just months after the upgrade, a new problem has reared its head and that is how much easier it is to sanction ETH transactions.

Back in August, the US Office of Foreign Assets Control (OFAC) imposed sanctions on multiple decentralized applications (DApps) on the Ethereum blockchain. These sanctions mainly focused on crypto mixers such as Tornado Cash and Blender which were accused of providing North Korean hackers a way to launder the money they stole from crypto investors.

Tornado Cash itself was said to have been used to launder more than $7 billion in crypto in three years since it was created. The sanctions led to the eventual shutdown of Tornado Cash and one of the developers were arrested by Dutch authorities.

Now, three months later, the majority of Ethereum blocks are now compliant with the OFAC sanctions. This chart below from MEV Watch shows, per 100 blocks, how many are enforcing OFAC censorship, and it comes out to more than 60% of blocks being OFAC compliant.

This means that the majority of Ethereum blocks are not adding transactions that have interacted with sanctioned applications such as Tornado Cash, drawing criticism of the network and how truly decentralized it is if this is happening.

There have been numerous allegations that moving Ethereum to a proof-of-stake mechanism had made it easier for authorities to control the transactions that can be carried out on the network. MEV Watch lists the seven major mev-boost relays, of which four were currently operating and censoring transactions according to OFAC sanctions.

These relays not including any transactions from wallets or smart contracts that have been sanctioned by OFAC deal a significant blow to the decentralization of Ethereum. If all relays were to comply with these requirements, it would mean that the government could successfully blacklist a wallet on a blockchain that is meant to be decentralized and keep that address from being able to transact – just like with a blacklisted bank account.

To successfully bypass this threat of complete censorship, validators need to make sure that when setting up their mev-boost configuration, they do not add these relays censoring transactions according to OFAC requirements. The more validators add censorship-compliant relays to their configurations, the more transactions are censored. 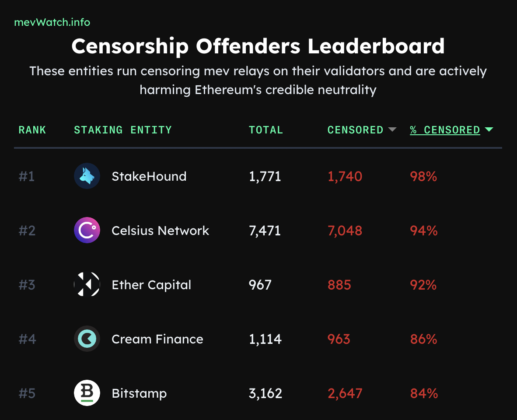 The MEV Watch website also includes a list of what it calls the “Censorship Offenders Leaderboard” listing the entities who are running censorship-compliant mev relays in their validators. The top 5 of these are StakeHound, Celsius Network, Ether Capital, Cream Finance, and Bitstamp.

EAN Exchange’s DeFi Token Offering (DEAN) Surges Past $0.70 And Why This Is Only The Beginning

Bitcoin futures ETF is available for trading on NYSE Arca, see how ZT shines in the ETF market

Optima emerges as the cryptocurrency exchange software with multiple features in the industry.